“Inside the moskito net” has been participating on various arts festivals; collaborating and also exploring arts in Ghana, Holland and Spain. It is our aim to promote share our concepts and to connect with other artists from all over the world.

We want to ‘connect nets’ between artists from this Project and artists from all over the world. We commit to show the works of these artists in Ghana and elsewhere as we raise concerns about environmental problems not only in Accra Ghana, but in all problem cities we work in, exploring into ways  to work to counter  such problems like  obsolete  electronic waste material which ends up on the shores of Africa. 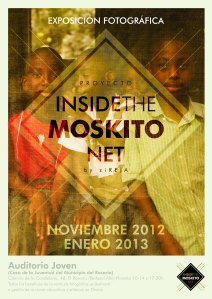 July 2012. Performance at Nima Munhimanchi Exhibition.” What do you want to put inside the MoskitoNet? ” InsidetheMoskitoNet joined to the NMA 2012 ( Exhibition & Concert by Nima Muhinmanchi Art workshops, conceived to empower youth in Nima, Accra to engage in the arts creatively, educationally, and vocationally). Nima, Accra, Ghana

May 2012 ” What do you hide inside the Fisherman’s Net? “Performance for the Exhibition ” Beautiful Ones Are Not Yet Born” By Studio Kurtycz and wonderful local and international artists on 31th May 2012. Goethe Institute, Accra, Ghana

Inside the Moskito Net Fan Page

Inside the Moskito Net Fan Page